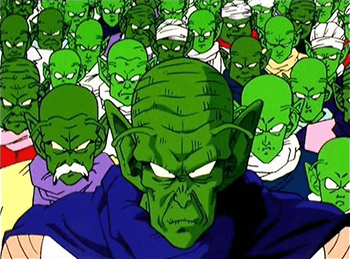 "You know, I've been stuck in these cages watching the mogu a lot, but I'm pretty sure I've never seen a girl mogu. What's with that?"
— Lao Softfoot, World of Warcraft: Mists of Pandaria
Advertisement:

In real life, there do exist all-female fish and whiptail lizard species. Also, some species have sequential hermaphroditism: meaning they can change genders throughout their lives. This can mean that the species has a very lopsided but stable sex ratio.