Video Game / A Hint of a Tint 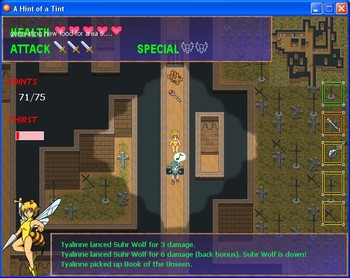 A Hint of a Tint is a 2013 freeware Roguelike, made in RPG Maker. Unlike most examples of its genre, the game is primarily story-driven, and dying during the story mode only restarts the particular level you’re on, and keeps the items obtained with the protagonist. There’s still the Survival Mode for those wishing to experience just the gameplay, though.

The story starts off quite light-hearted at first, but becomes quite dark afterwards. It begins with a young woman named Mandy being transported to a strange world whose inhabitants are all female, and are half-human, half-animal creatures. They come in many forms, from the traditional Centauri and Mermaids to truly exotic ones like half-human Bees and Butterflies, and are known collectively as Flesh of the Tail. They’re all convinced Mandy has been newly created by a device known as a Spawn Symbol, and don’t believe her claims of having perfect memories of past.

Mostly, though, they’re just disappointed at her appearance, since all were waiting for a Tailess (human) male to appear, as all of their races require them for procreation.

Tyalinne, a Bee Soldier, is one of the many Flesh of the Tail searching for a human male for the sake of her species, and she’s secretly followed by the Assassin Bee Dyonne, on the order from the Bee Queen who’s beginning to doubt Tyalinne’s loyalty. Mandy herself needs to hurry, since all the water in the world she’s in is pink in hue: perfect for the Flesh of the Tail, yet utterly undrinkable for humans like her. This is just the beginning of a story, one that later grows to involve time travel, biblical themes, and more. It can be downloaded here

A Hint of a Tint provides examples of: