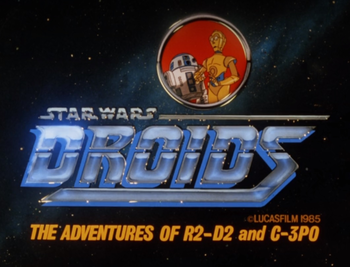 Star Wars: Droids — The Adventures of R2-D2 and C-3PO is a cartoon from the mid-80s, produced by Nelvana for ABC starring the titular robots of Star Wars. It follows the two droids during their adventures long before the original trilogy (four years after Revenge of the Sith, to be exact). Along the way, they run into angry mob bosses, lost kings, and all manner of monsters and hostile robots. It was partnered with fellow Star Wars-based cartoon Ewoks, though this show didn't get a second season unlike Ewoks.
Advertisement:

Due to the Legends revamp, this show is no longer considered canon. However, it's still worth checking out for those who are curious as to how far animated adaptations of Lucasfilm properties have come over the years. It is now available on Disney+.

Artoo! HELP!! We're being attacked by the following tropes!