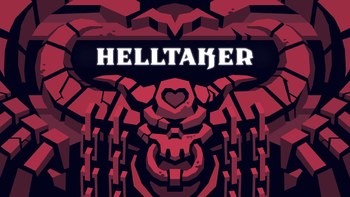 For Love, He'll Go To Hell. Quite literally.
You woke up one day with a dream. Harem full of demon girls. You've opened the portal in hopes of fulfilling your wildest desires. Hellfire burns through your lungs, death awaits around every corner and everything looks like from a cutesy mobile game. You are in Hell.
—Steam Description
Advertisement:

is a free Indie Game made by vanripper (Łukasz Piskorz). It follows the exploits of the Helltaker, a man who looks like an Expy of Johnny Bravo as he decides to visit Fire and Brimstone Hell so he can assemble a harem of demon girls via a series of block puzzles and chocolate pancakes. It takes itself about as seriously as one would expect.

Learn more about the cast here. Watch the game's trailer on YouTube here

. Check out the supplementary comics here

. Tropes relating to the web comics should go on its own page.

It got a free expansion on the game's first anniversary called Examtaker, telling a future story of a demon created by the Science Demon Loremaster to do experiments upon.

Not to be confused with Hellsinker.

WARNING! Due to the short length and fast pace of the game if played knowing what you're doing, spoilers relating to everything besides the secret ending and Examtaker will be left unmarked.

Tropes that apply to Examtaker DLC