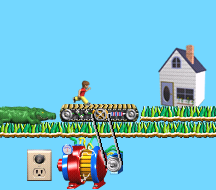 Mel Schlemming is not having a good day.
Exacerbating the situation, Mario said, is the seemingly arbitrary placement of the hazards. "I could see why, if you're in a factory, you might find yourself jumping around on dangerous conveyor belts moving in different directions," he said. "But why would you have conveyor belts in a castle? Or in the middle of a forest?"
— The Onion, "Video-Game Characters Denounce Randomly Placed Swinging Blades"

In Real Life, conveyor belts, escalators, moving walkways and similar conveyances are part of certain specialized environments, and serve the function of moving things in a convenient direction. In video games, conveyor belts can show up anywhere: in the middle of a forest, in underground catacombs, etc. These belts don't move in a logical direction. They carry pedestrians into Spikes of Doom or drop them down Bottomless Pits. Multiple conveyor belts move in opposite directions to trap players.

In short, the conveyor belt in video games often serves the purpose of hindering instead of helping its user.

This is almost always a sub-trope of Malevolent Architecture. (It could be some sort of Benevolent Architecture, but don't count on it.) Justified by the Rule of Fun, though it can get irritating on occasion, particularly when used with other, nastier hazards like Spikes of Doom, Smashing Hallway Traps, Descending Ceilings and the like.

In top-down games, a conveyor belt will often act as a Broken Bridge, going too fast for you to be able to run against. It's a one-way trip unless you can find a way to shut it off, reverse it, outrun its effect, or somehow become immune to its effects.

Occasionally overlaps with Conveyor Belt o' Doom, which may get adapted into this trope in Licensed Games. Common feature of an Eternal Engine level.