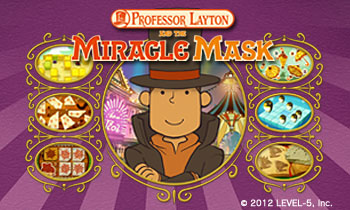 Professor Layton has been asked to investigate mysterious happenings in the city of Monte d'Or, where the Masked Gentleman, wearing the Mask of Chaos referred to in the title, has been wreaking havoc on the town by causing "miracles" to happen, such as turning people into stone and into horses. Once again, the professor is met with people hiding their fair amount of secrets...

That is, in the present, anyway. The game also has segments involving a high school age Layton, whose experiences in the past are key to solving his present mystery.

Alternative Title(s): Professor Layton And The Mask Of Miracle