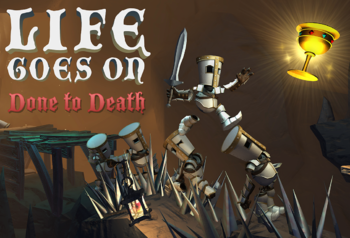 Death is not a setback.
Advertisement:

Life Goes On is a cute looking 2D puzzle platformer game with a morbid, sardonic outlook on life. Created by Infinite Monkeys Entertainment the player must kill heroic knights in a variety of gruesome ways to complete the levels. The ultimate aim of the game is to retrieve the mystical "Cup of Life" for an aging King that wishes to live forever, who isn't too squeamish about sending his loyal wards to their deaths.

Originally released in 2014 for the PC the dev team spent two years improving the game before it's final release Life Goes on: Done to Death in 2016, updating the PC version and also porting to the PlayStation 4. In 2018 the game was ported to the Nintendo Switch.