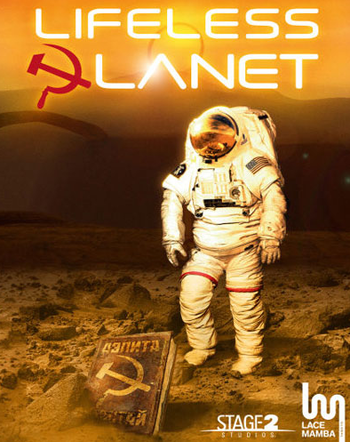 Lifeless Planet is an indie Puzzle Platformer, developed by Stage 2 Studios and released on June 6th, 2014 for PC. An Updated Re-release titled Lifeless Planet: Premier Edition followed for Xbox One on May 13th, 2015, PS4 on July 19th, 2016, and Nintendo Switch on September 6th, 2018. A Spiritual Successor named Lifeless Moon is due to come out in 2020.

It follows the exploits of an astronaut who has crashed down on what was thought to be a lush planet, but has turned out to be a barren wasteland, devoid of life save for the remnants of a Soviet colony and a mysterious woman wandering around the landscape.