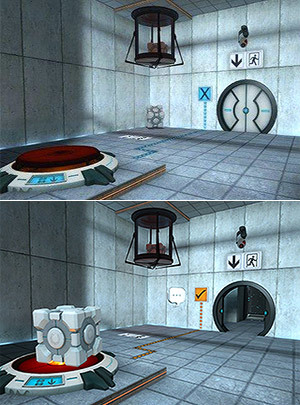 Sometimes they're used for Block Puzzles. Sometimes they're to make sure you need two people to get through an area. Sometimes they just mean you don't have to press the use button. And sometimes they're just barely discernible and you really don't want to step on them. Whatever the case, a surprising number of mechanical doors are hooked up to pressure plates. Common in puzzle platformers. Often, there are two distinct types: one that stays pressed and active when you step off, and one that doesn't and needs to be held down by a box or something else.