Video Game / This Is the Only Level 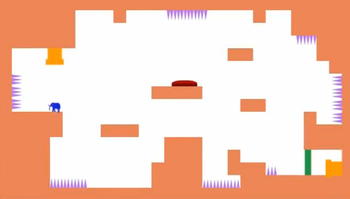 The level. It'll get plenty more changes as the game goes on.
"Elephants sometimes do forget... the rest of the levels."
— Slogan for This Is The Only Level
Advertisement:

This Is The Only Level (Adventures in Singularity) is a game created by jmtb02 and released on August 7th, 2009. It features an elephant, trying to escape a room. That's all the game is.

Or so you would think.

Actually, there is only one level... but you have to repeat it, over and over. And each time you finish it, the aspect of the levels changes. There are thirty variations of the level (called stages) in all, and each of them are different.

The game received a few sequels, co-developed by Tasselfoot. This is the Only Level TOO (The Heroic Quest to Complete Another Level) is over here

, and This is the Only Level 3 is here

. This is the Only Level 4 is here

, and it is developed by Tasselfoot and IriySoft, and does not involve jmtb02.

The same elephant stars in Achievement Unlocked and its sequel, as well as Elephant Rave

Since each game takes about 10-20 minutes to complete, all spoilers will be unmarked. It's suggested that you play through the games first before scrolling down this page.

All four levels provide examples of:

Level 1 (This is the Only Level) provides examples of:

Level 2 (This is the Only Level TOO) provides examples of:

Stage Complete!
But is the level over...?