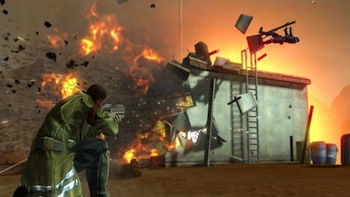 "BLOW IT ALL UP!!!"
Advertisement:

With the advent of fully destructible environments in modern computer games, sometimes the game world's destructibility gets taken a bit too far. Since everything seems to collapse as soon as anything touches it, planning vehicle paths, especially in Real-Time Strategy games, becomes crucial if one doesn't want to lose other potential benefits of the scenery, such as (following the previous example) cover for infantry.