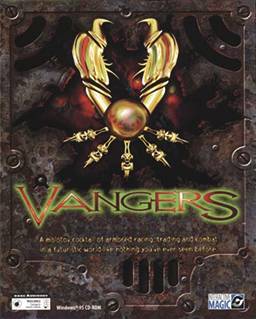 Vangers: One for the road is a Russian Wide-Open Sandbox game created by K-D Lab in 1998. It can be described as a racing role-playing adventure game with a complicated storyline. It was praised for its unique atmosphere, freedom and innovative engine, but it had never become popular enough.

The first thing to hit the eye is the game's enormous Backstory. In a nutshell, the intelligent human "Spirits" have been contacted by the enigmatic Infinite Mind, and the technologies obtained from the contact have enabled the humanity to travel between worlds by creating the Passages. The worlds were systematically colonized by the enthusiasts, but then everything went horribly wrong when the Cryspo were discovered, which turned out to be something more than the usual beasts the humans have been casually hunting down during the colonization. The Clash ensued, and humanity was on the brink of extinction, and then, in desperation, an attempt was made to defeat the Cryspo using the genetic intrusion. Unexpectedly, it affected humans as well, and the results were not pretty: the "Softie" and the Cryspo were fused together, forming the freakishly unstable Bouillon of Spawn. The resulting biomass was evolving for eons, barely sustaining its existence, and eventually the genetic chaos gave birth to three different Bios: the Eleepods, the Beeboorats and the Zeexen. The only living things unaffected were the Larvae, which, before the Clash, were implicitly controlling the Cryspo with a complex system of pheromones. The new lifeforms have inherited the human mind and the Cryspos' instincts, which bind certain behavioral patterns to the smell of certain pheromones, and thus had stuck in performing pointless endless rituals to give their mind a twisted kind of purpose.

Now, disregard all that.

The Vangers are unknown entities bound to their mechos (autonomous all-terrain cars). Nobody really knows how they appeared and what they really are - their existence is just taken for granted. The Vangers play the role of truckers, traders, pirates - pretty much any role, as long as it is profitable. You are a newborn Vanger, and your only goal for now is to survive in this wicked world...

The game was succeeded by Perimeter, which, while being an RTS, used the same Verse and was partially based on the Vangers' voxel engine. It is currently being ported to Linux by its devoted community.