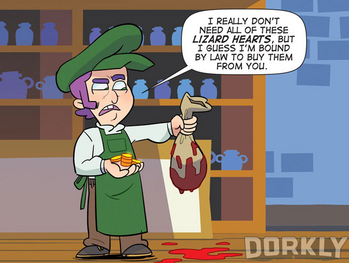 "Tip two, pick up everything - everything - and sell it. Everything. Crisp Basilisk Urethra? Pick it up. Put it in your bag. There's somebody out there who wants that."
— Penny Arcade, "Internalize This Deep Wisdom

That's right, a bread baker in a poor village will gladly pay you for anything from Shop Fodder to the Infinity +1 Sword, as will a renowned shield crafter in a capital city. What exactly they do with these items depends on the game. If you're lucky, the same vendor will offer them for sale at triple the price (even if it has nothing to do with the items they usually sell); otherwise, they will vanish without a trace and be gone forever.

It is unknown how these vendors make a living; they can't profitably resell the things you sell to them, since all the other vendors in the game usually pay the exact same prices for the same items. This especially applies to the vendors in RPGs that are unlucky enough to be the closest to the favorite player hangouts in a Hub City: nobody ever buys anything from them, but everyone uses them to dispose of their junk.

Of course, this is done for the player's own good, so they won't have to run in circles seeking a vendor that would buy a particular item: they can just sell all of their Shop Fodder and equipment that's Better Off Sold in one go.

This is unrelated to the situation where, in an effort to keep the player from disposing of an unknown but important quest item, all stores either refuse the sale or pay $0 for it.

Compare with We Sell Everything.