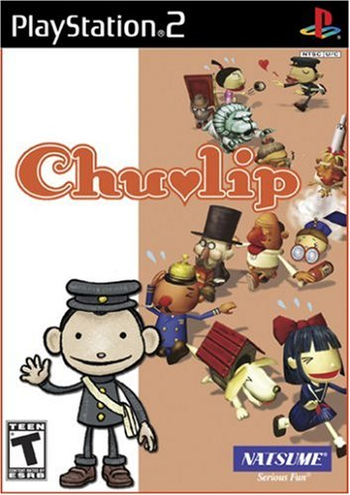 Pucker up for the sake of true love!
Advertisement:

Chulip is an adventure game developed by Punchline and published by Natsume for the PlayStation 2. You play as a young boy who immediately encounters his true love upon moving into a town full of quirky people. However, the boy lacks the confidence he needs to ask her out, so he must go on a quest to write the perfect love letter. He must also obtain a high reputation, which he must do by kissing as many characters as he can.

Including old ladies. And men. And turtles. And aliens. And... yeah. It's that kind of weird game. But it won't be easy. Kissing people out of the blue is a surefire way to lose HP, and every character lives by their own schedules. The boy's emotions are very easily upset and too much stress from just about anything unpleasant will make him heartbroken, and the town becomes more dangerous at night. Still, the boy sets out to romance the girl of his dreams and prove that love conquers all.