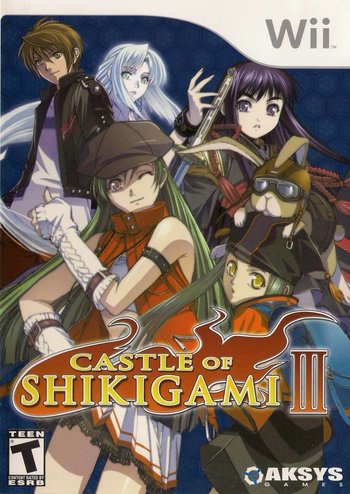 Castle of Shikigami (also known as Shikigami no Shiro in Japan) is a trilogy of arcade Bullet Hell shoot 'em ups developed by Alfa System. The overarching plot involves a mysterious castle in the country of Alcaland, which has been the subject of many "missing persons" cases. A handful of psychics have converged on the location to conduct their own investigations of the incident, each for his or her own reasons. The first game was released in 2001 in Japan, Castle of Shikigami II followed in 2003 and Castle of Shikigami III launched in 2006.

As of 2008, all three of the main games have been released in the U.S. for the PlayStation 2 (for the first two games) and Nintendo Wii (CoS III). Other ports on Sega Dreamcast (CoS II), Nintendo GameCube (CoS II), Xbox (CoS II), and Xbox 360 (CoS III) are also available, but only in Japan. The entire series also saw Japan-only PC ports. There was a Fan Translation in the works for the first game's PC port; however, in 2017, the first instalment of the series has been picked up by Degica Games for an overseas release on Steam. The second installment is planned for a December 2021 release, with a reworked translation as one of the main selling points, due to the original's infamy.

A Character Sheet is currently in the works.