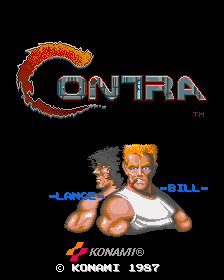 Any resemblance to Arnie and Sly is probably intentional.
"Fire! Fire! Fire! And don't stop firing are the only instructions you need. Because in this Doomsday extravaganza, there's little time for thinking. A killer instinct is all that matters. And if your trigger finger lacks stamina, Earth will lack a future."
— From the Super C manual
Advertisement:

Known as Gryzor (the arcade and home computer versions) or Probotector (the home console versions) in Europe.

and was scheduled to be released in 2019, a date it missed. Its current status is unknown.