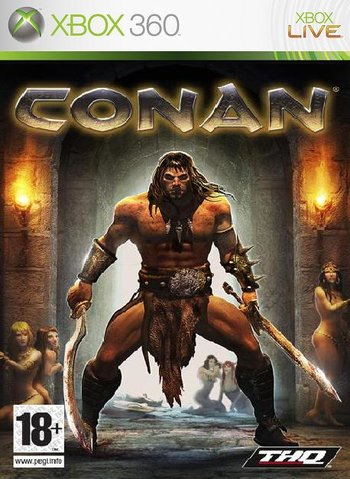 Conan was a 2007 game developed by Nihilistic Software and published by THQ for the Xbox 360 and PlayStation 3, that puts players in control of Conan the Barbarian. Set in the Hyborian Age, in a time shining kingdoms lay spread across the world like blue mantles beneath the stars, hither comes Conan the Cimmerian, the black-haired and sullen-eyed barbarian, who during the exploration of an island forgotten by time, ends up unwittingly releasing an unspeakable evil upon the world. Now, it's up to him to stop it. The game is a Hack and Slash in the same vein as God of War, that has the gamers moving from level to level fighting wave of enemies and solving some puzzles. The gameplay offers a variety of weapons for Conan to wield such as two-handed, dual-wielding and sword and shield, and its possible to perform combat finishers by successfully parrying attacks. Ron Perlman lends his voice to the title character and Claudia Black portrays the lead female character, A'kanna.

This work contains examples of the following tropes