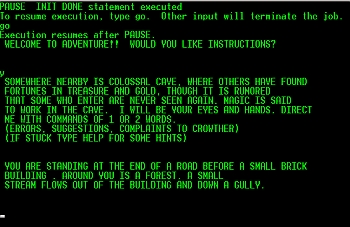 ADVENT, also known as Adventure or Colossal Cave Adventure, is the ur-Interactive Fiction game. Originally written by Will Crowther in the mid-1970s as an attempt at a computer-refereed fantasy game inspired by Dungeons & Dragons, based on his map of the Mammoth Cave system in Kentucky. His version was ready by 1976. The game was then greatly expanded by Don Woods in 1977.

According to legend, Don Woods played Adventure in its original form, and attempted to contact Crowther for permission to expand the program. Naturally, Woods didn't have Crowther's mailing address, so he resorted to the fledgling Internet and e-mail; as the Internet itself had only about three hundred networked systems at the time, Woods simply sent a blanket e-mail to 'crowther@' every network.

Colossal Cave Adventure is a text-based game in which the player explores a large complex of underground caverns — Will Crowther wrote the game for his daughters, who were at the time too young to join him on caving expeditions. The layout is so precise that, in at least one instance, an inexperienced caver was able to navigate flawlessly in the Mammoth cave system on her first visit.

The dryly humorous, terse narration style of the game set the standard for future Interactive Fiction games. Much of the style also influenced early MUDs, still evident in modern examples.

Developed on BBN's PDP-10, the game was written in FORTRAN and later ported to C under UNIX. Further iterations of the game were re-written in custom languages developed specifically to handle the unique features of text-based interactive adventure games.

Many versions and descendants of the game have been released, mostly under the title Adventure or some variation thereof (e.g., Adventure II, Adventure 550, Adventureland, etc.) Even Microsoft published a version of the game, packaged with its original MS-DOS 1.0 for the IBM PC. The Infocom classic Zork began life as a remake of Adventure, and both Zork and Adventure influenced Dunnet, a cyberpunk text adventure buried as an Easter Egg in the Emacs text editor,note well, sort of. Emacs is a Lisp interpreter as well as a text editor, and it ships with a number of Lisp programs (earning it the nickname of the "operating system in want of a good editor"), Dunnet being one of them. It is nevertheless often considered an easter egg by OS X users. which is in turn included as standard with Mac OS X.

Some phrases popularized by ADVENT are:

Advent is also responsible for the Classic Cheat Code "XYZZY."

'Advent' is believed to be directly responsible for coining the term 'adventure game', and is known to have inspired Roberta Williams to develop her first computer game, Mystery House, which would, in turn, lead to the founding of On-Line Systems (later Sierra Online) with her husband Ken.

In addition, the game inspired an offbeat 'hobby' known as 'urban exploration', or 'vadding'. An often-illegal pursuit, 'vadding' involves entering steam tunnels, access tunnels, sewers or abandoned buildings to explore and take photographs. The term 'vadding' came directly from 'Advent' — a great number of urban explorers were Colossal Cave enthusiasts, and the game would appear with remarkable frequency on college and university computer networks under the name 'Advent'. When system administrators caught on to the game's presence, they began to remove 'Advent' whenever it was discovered. Enterprising players then simply renamed the game 'Adv', and when that tactic was discovered, reversed it, turning it into 'Vad', which (because of the game's emphasis on exploration) became the de facto term for referring to the real-life hobby.

(Public Service Announcement: Readers should be aware that Vadding may be illegal (if it involves trespassing or breaking-and-entering), and can be quite dangerous (as in serious injury, possibly death). Follow the Urban Explorer's Golden Rule: Do NOT go Vadding alone).

Much of the information on this page comes from the Jargon File entry. The game is among the more important heirloom artifacts of the hacker culture the File describes.