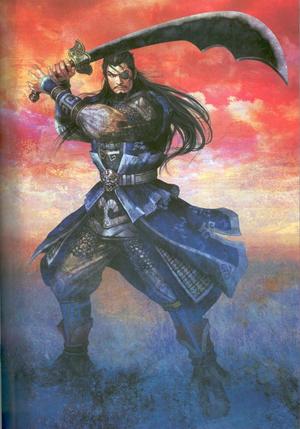 Yup, that can't be good...
"Have you seen those warriors from Hammerfell? They have curved swords. Curved. Swords."
— Random Guards, The Elder Scrolls V: Skyrim
Advertisement:

Whenever an army of evil creatures like Orcs and such is introduced, be sure that most of the time they will be armed with scimitars, falchions, sabers and other curved weapons. Alternatively, a particular evil character or warrior is armed with such a weapon to underline his bad guy status. Seen more often if the "good guys" or the "good army" wields straight swords. In many cases, expect the scimitar to be far broader towards the tip than at its base and have a scalloped back edge near its tip.

Probably born from the European view of the Crusades, where Christians fought scimitar-wielding Muslims,note In actuality, Arabs and other predominantly Muslim peoples preferred the spear and straight sword as weapons for much of the Middle Ages, until curved swords became widespread under Turco-Mongol influence, while the Crusaders used curved or machete-like falchions alongside their own straight swords. or the Turkic raiders from the steppes such as the Tatars. Another possible influence could be cutlass-wielding pirates of 17th century Caribbean.

), probably because it looks way cooler to beat someone who has a bigger sword. Also, adding to the realism, they don't use designer weapons they make up, but Real Life weapons that are roughly the correct size. Some older novels prefer heroes wielding a Simple Staff or a Blade on a Stick.

Of course, this trope has one primary exception: if the hero comes from a place where scimitars and sabers are used as a "default," though in these cases it's more likely because everyone uses them. See also Weapon of Choice and Good Weapon, Evil Weapon. Expect to see it often in Qurac and in "Arabian Nights" Days settings.

A possible modern day example of evil weapons having a "curve" to them can be found in many Kalashnikov type assault rifles, because the tapered 7.62x39 round they are chambered for gives the magazine a distinct curve.

Compare and Contrast Katanas Are Just Better, which is the Far Eastern equivalent to this trope. Contrast to the inverse trope of Suave Sabre in which a curved blade is a mark of a noble warrior rather than a cruel one.

The Thief Costume that Sly can get in this level that originally belonged to Salim comes with a Sinister Scimitar as big as he is that can one-hit K.O. rooftop guards and two-hit kill flashlight guards.

The Thief Costume that Sly can get in this level that originally belonged to Salim comes with a Sinister Scimitar as big as he is that can one-hit K.O. rooftop guards and two-hit kill flashlight guards.