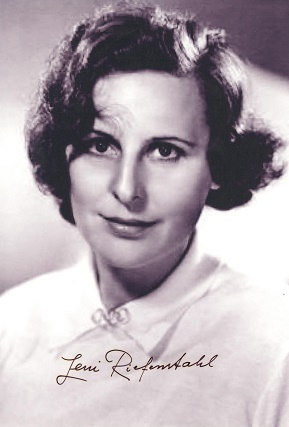 "I feel as though I have lived many lives, experienced the heights and depths of each and like the waves of the ocean, never known rest. Throughout the years, I have looked always for the unusual, for the wonderful, for the mysteries at the heart of life."
Advertisement:

She first trained as a dancer and played in several German films of the 1920s and 1930s. Five of these were successes, including The Sacred Mountain (Der heilige Berg) and The White Hell of Pitz Palu (Die weisse Hölle vom Piz Palü — if you haven't seen that one, you probably heard of it in Inglourious Basterds). She then embraced a career in film directing during the rise of Nazi Germany. Her first directed film was a fiction, Das Blaue Licht (The Blue Light), in 1932.

Her most well known directorial efforts were documentaries counting among the most visually striking and influential propaganda pieces ever filmed. How influential? Ask George Lucas, who took some cues from her when filming crowds in Star Wars. They earned her a privileged place in the artistic world of Nazi Germany, which was most unusual considering the era's sexism that vastly limited opportunities for women.

She was arrested by the Allies at the end of World War II, but classified as "fellow traveler" / "Nazi sympathiser" only and was not associated with the regime's war crimes and crimes against humanity. She was nonetheless prohibited from directing again and focused on photography instead. She had a particular interest in the Nuba peoples

of Sudan and later underwater photography (she started underwater diving in her 70s and practiced it well into her 90s, no less). She passed away a few days after her 101st birthday in 2003.

Leni's life and ties with the Nazi regime, and with Adolf Hitler in particular, remain subject of controversy up to this day, controversial enough for people like Jodie Foster and Steven Soderbergh to back down on biopic projects about her.

Trivia about her works: