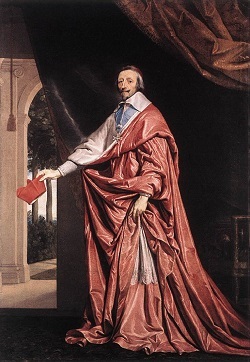 Pretty in pink, perhaps, but don't let that fool you.
"If there is a God, Cardinal Richelieu will have much to answer for. If not, he has done very well."
— Attributed to Pope Urban VIII
Advertisement:

Cardinal Armand Jean du Plessis, Duke of Richelieu (9 September 1585 – 4 December 1642), chief minister to King Louis XIII of France, was a French clergyman, brilliant politician, effective war leader, Spymaster, writer, and patron of the arts. He is also a popular Historical Domain Character and more or less the Trope Codifier for European versions of the Evil Chancellor — largely because of his appearance in Alexandre Dumas's The Three Musketeers and its many adaptations and derivative works. This is despite the fact that in the novel, he's more of an Anti-Villain who generally has France's interests in mind, if only because making France great means making himself great. Nonetheless, Richelieu's reputation as the deadliest of political manipulators started in his own lifetime, for very, very good reasons. His fictional representations, usually as The Chessmaster, may be romanticised, but they generally don't represent a Historical Villain Upgrade.

He was born into a noble family who had been rewarded for their service to the crown by being given the bishopric of Luçon, and who needed the money from that office to support them. However, the brilliant Armand was initially set for a military career, until his older brother decided he wanted to become a monk instead of a bishop. So Armand switched to theology, becoming Bishop of Luçon at the age of 22. He took the job seriously, earning the respect of the Vatican, but eventually moved to the royal court. There, he initially allied with the king's mother, Marie de Médicis, while she was regent for the child king. Armand made enemies and had to work to preserve relations between Marie and Louis as the king grew old enough to rule, but eventually impressed Louis enough to be made chief minister (and thus was a badass Sinister Minister in more than one sense), after which he fell out with Marie. He set to work strengthening the king against both the commoners and the nobility and also strengthening France. That meant undermining the rival Habsburg Empire, initially by financing its enemies in the Thirty Years' War. However, France had eventually to fight the Empire head on — and won, despite some close calls, largely thanks to Richelieu's strategic planning. However, he didn't live long enough to see its ultimate triumph.

Richelieu was known as the "Red Eminence" — red for his grand cardinal's robes, and "eminence" is a term of address for Catholic cardinals — making him something of a real-life Color Character.note Incidentally, a common term for The Man Behind the Man is Éminence Grise (French for Grey Eminence) which refers to Richelieu's confidant, François Leclerc du Tremblay.

He ran a spy network and royal guard that allegedly verged on a prototypical State Sec agency; it is said that his agents carried a letter authorising them to do whatever was necessary in his service, without legal limits. Although he evidently charmed many people whose aid he needed, he apparently wasn't popular with the French peasantry, who presumably knew when they were being used as disposable pawns; he was an aristocrat, with little time for lesser mortals. However, what few of the fictional depictions of the man show is that he was often sickly and unwell. After all, a Magnificent Bastard with a permanent sniffle or cough may not be quite threatening enough...

Richelieu's successor was also a cardinal, the Italian-born Jules Mazarin (1602-1661), and he too had much success in consolidating the French crown's absolute monarchy, paving the way for Louis XIV's assumption of power (not so surprising given Richelieu mentored him). Mazarin is thus often fictionally portrayed as a Suspiciously Similar Substitute for Richelieu in stories that take place after the end of Richelieu's life.

Works in which Richelieu appears: