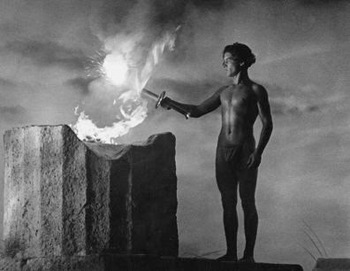 It is a documentary about the 1936 Olympic Games, held in Nazi Berlin; in terms of actual sporting contests, Part I is dedicated to track and field, while Part II is dedicated to the other events. Adolf Hitler and the Nazis were originally reluctant to stage the Olympics, which were awarded to Germany well before the Nazi seizure of power in 1933. Eventually Hitler was talked into going through with the Games as a way to show off the new Germany to the world. Leni Riefenstahl, who had become famous with her Nazi propaganda documentary Triumph of the Will, was hired to direct another documentary.

The resulting film is something of a mixed bag. There are many shots of Hitler in his box, there are swastika flags everywhere, and the 800m race is introduced as “two black runners against the strongest of the white race”. (The aforementioned black runners, John Woodruff and Phil Edwards, finished first and third.)note Why are the athletes in this Olympics so overwhelmingly white, aside from Owens, a few other Americans, and the Japanese? Because almost all of Africa and much of Southeast Asia was under the colonial thumb of Europe. However, Jesse Owens also gets a lot of admiring coverage, including a shot of him bashfully smiling at the camera after he defeated Luz Long in the long jump. And much like Triumph of The Will, the cinematography is stunningly beautiful. Regardless of to what degree the film is viewed as Nazi propaganda, it is recognized as hugely influential in the depiction of sporting events, with groundbreaking techniques like slo-mo and tracking shots of athletes in motion that have been used aplenty ever since.

The Olympic torch relay shown at the beginnning of Part I was the first ever, having been invented by the Nazis for this ceremony. Captain Nishi, the Japanese steeplechase rider shown taking a spill, was killed in action at Iwo Jima in 1945 (it is depicted in Letters from Iwo Jima).