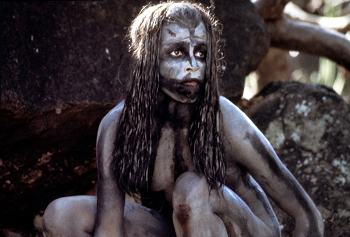 When I was an adolescent, the only reliable source of breast visuals was National Geographic, a magazine then devoted, as far as I can tell, to doing feature articles on every primitive tribe in the world in which the women went around topless. When I was in junior high school, my friends and I were extremely interested in these articles, specifically the photographs that had captions like "A young woman of the Mbonga tribe prepares supper using primitive implements." We would spend long periods of time staring at the young woman's implements, and we'd wonder how come we'd had the incredibly bad luck of being born in the one society in the entire world (judging from National Geographic) wherein women wore a lot of clothes.
— Dave Barry's Complete Guide to Guys
Advertisement:

So here's this highly acclaimed motion picture about a pre-industrial tribe and its customs. Perhaps the film details this tribe's interactions with white folks, or takes place entirely before they arrive. It just so happens that in the culture displayed, the women wear very little clothing or walk around topless.

But there's a part of you that can't help thinking the entire film is nothing but an excuse to have lots of people running around with few or no clothes on.

The Trope Namer is National Geographic Magazine, which sometimes shows topless women when running an article on tribal cultures where the women don't customarily cover their breasts. Almost all PG-13- or R-rated movies owe their ability to show any skin to old nudist films in this vein, such as Holiday in the Sun or Garden of Eden. The trope originally concerned innocent and rather tame nudist documentaries; when the nudists of the time successfully fought for the right to show nudity on the silver screen for nudist films under the justification that it wasn't sexual, filmmakers used the new loophole to make hundreds of B Movies using the setting to allow them to show flesh.

Films such as The House on Bare Mountain or The Beast that Killed Women nominally took place at a nudist colony or whatnot, but dropped this outside random shots of naked (or usually just topless) women — and never, ever, naked men.

This trope is dominant on the Australian TV network SBS.