Literature / Queen of the Black Coast 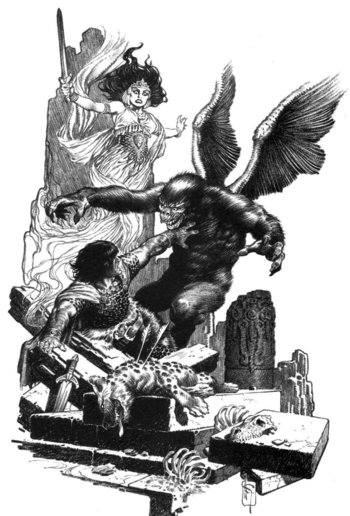 Believe the green buds awaken in the spring,
That autumn paints the leaves with somber fire;
Believe I held my heart inviolate
To lavish on one man my hot desire.
— The Song of Bêlit
Advertisement:

Queen of the Black Coast is a Conan the Barbarian tale by Robert E. Howard.

The story begins in Argos, with Conan fleeing for the docks, and the law in hot pursuit. He leaps aboard a merchant vessel, making good his escape, where he is welcomed by the captain, Tito. An infamous Pirate Girl named Bêlit has been terrorizing the coastline, and strong warriors like Conan are in particular demand for protection from the pirates.

Naturally, before long said pirates attack the ship, and Conan slays numerous crew before Bêlit herself intervenes - not by fighting Conan, but by seducing him. The two fall in love almost immediately, finding in each other a kindred spirit in a world where they are outsiders. They ravage the coastline together, their combined martial prowess so great that they become nearly legendary icons of piracy.

Then, Bêlit suggests an adventure up a deadly and forbidden jungle river, to a mythical city of ruins where great treasure is said to wait for anyone brave (or stupid) enough to enter, setting up a confrontation with worse horrors than even they had imagined.

Renowned not only as one of Howard's best stories, but as one of the greatest examples of pulp fiction and heroic fantasy ever written. Not only is the narrative smooth flowing and well polished, but Howard's penchant for poetry reaches its zenith. Bêlit herself is among Howard's best known characters despite only appearing in this one story - she's been named among the best female pirates in fiction, and was a major inspiration for the character of Valeria in the 1982 Conan film (in fact, since Valeria isn't named onscreen until the sequel, many thought she was Bêlit).

It's also the point at which Howard started including more blatant Fanservice into the Conan stories, between Bêlit's Diamonds in the Buff and numerous assorted naked women (and men, to be fair). Showing that a Conan story being chock-full of nudity and being good aren't mutually exclusive.

The story has entered the public domain and may be read here: Queen of the Black Coast