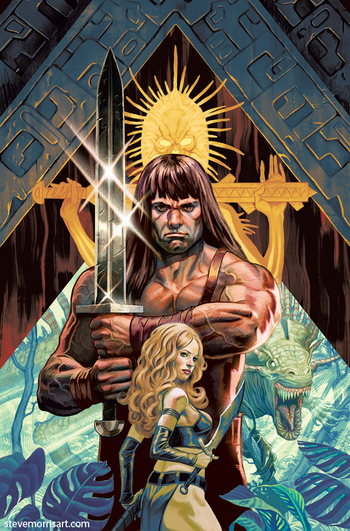 " is a Conan the Barbarian novella by Robert E. Howard, the last Conan story he ever wrote. Published in 3 parts, from July to October, 1936. It can be read online

After escaping from her previous employer, Valeria of the Red Brotherhood finds herself lost in a seemingly endless jungle. She's quickly joined by fellow deserter Conan, who is quite smitten with her, only for the two to be immediately attacked by a large dragon. Stranding them on a rocky outcrop, they see a field stretching out from the jungle, and further still, a domed city far away in the distance. Stabbing the dragon with a poisoned spear, they make a break for the clearing, eventually arriving at the city gates after a full days travel.

They find the city to be seemingly deserted, made up of a endless maze of emerald green alcoves and hallways, lighted by flaming green crystals. After much exploring, they stumble upon a terrified individual, and are immediately set upon by attackers using mysterious artifacts. After saving the man, he introduces himself as Techotl, and hurriedly brings them to his people, as there are things which hide in the dark hallways.

The leaders of his people, Olmec and Tascela, tell them the tale of their people; how their people separated into three factions decades ago and have been waging war ever since, how barely more than fifty of them still live, and how one of the factions was killed off, its leader Tolkemec gone mad to live in the catacombs beneath the city. Behind their throne sits a black pillar covered in red nails, each representing a slain enemy. They offer to help Conan and Valeria escape if they help them slay the last remaining members of their enemies, which they begrudgingly agree to.

After repelling a surprise attack from their enemies, Olmec declares the war over, their enemies all dead. He commands Conan and several of his men to go check the enemy base for survivors. Whilst there, Conan is betrayed by one of the men sent with him, who says he was told to kill Conan so Olmec could have Valeria as his slave. Olmec tries to take Valeria, but as she repels him, Tascela arrives and takes her for her own, leaving Olmec to die on a torture rack. Conan arrives just in time as Valeria is about to be sacrificed to Tascela's hunger.

Suddenly, from out of the darkness, Tolkemec appears and proceeds to shoot everyone in sight with his magic wand. Conan narrowly defeats the mad wizard, and Valeria kills Tascela. The two of them embrace, and proceed to leave the now dead city.

Howard was suffering from many real world problems when he wrote Red Nails, such as a messy break up with his then girlfriend and his mother's failing health putting an emotional strain on him, as well as an ongoing battle with depression and financial ruin, which may explain the more visceral nature and downer ending as compare to some of his other Conan tales.

Marvel Comics adapted the story in comic book form in issues 2 and 3 of the Savage Tales of Conan the Barbarian, with art by Barry Windsor-Smith. An animated-adaptation has been in Development Hell for years.