Literature / The Hour of the Dragon 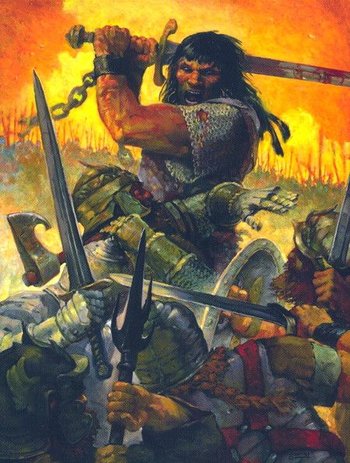 The Hour of the Dragon

is the only full length Conan the Barbarian novel by Robert E. Howard. Published in 5 parts, from December, 1935 to April, 1936.

An ancient wizard named Xaltotun is brought Back from the Dead by a group of Nemedian conspirators using the Heart of Ahriman. Xaltotun seeks to conquer the world, but first he sets his eyes on Aquilonia, and its king, Conan. Using his dark magic, he defeats Conan and locks him away, setting his forces to reap the spoils of Conan's fallen kingdom.

A slave girl named Zenobia, who has fallen in love with Conan, helps him to escape and steal the Heart of Ahriman. Unfortunately, Conan loses the Heart, and must travel from one end of Hyboria to the other in order to get it back, having many adventures along the way. All the while he is pursued by Xaltotun's evil minions, who seek to reclaim the Heart.

After reclaiming the Heart, Conan rallies his forces, including an order of good magic users called the Cult of Asura, and sets out to reclaim his kingdom and save the world from Xaltotun.

Marvel Comics began their adaptation of the story in their Conan the Barbarian comic book and finished it in the Savage Sword of Conan magazine. Darkhorse Comics would make their own comic adaptation years later. Ablaze, as of 2022, have taken to adapting the story as well.

The story received a loose adaptation with the 1997's Kull The Conqueror movie.