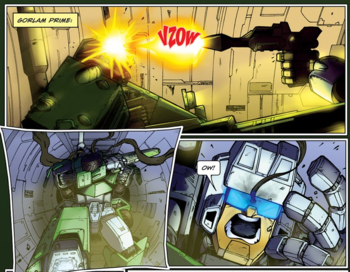 Hardhead lives up to his name.
"If my head were any harder, you could use it for a cannonball."
— Pazu, Castle in the Sky
Advertisement:

A subtrope of Made of Iron, perhaps its most common usage. Whether in a Tap on the Head situation, Use Your Head, or any other, getting hit on the head has no lasting effects whatsoever. If you clobber The Hero, the villain, or assorted small fry, they may be very, very dizzy or even out for a while but they will never suffer worse than a headache once they wake up — unless Easy Amnesia is needed. All right, you can also have Circling Birdies if you want. But nothing else.

In short, fictional head injuries are no worse than inconvenient, so have as many as you want.

This is in no way Truth in Television. A blow to the head is probably the worst way to render someone unconscious, especially if you're trying to do it "gently". Injuries from even relatively light blows can be serious, permanent, or even fatal. Whether or not you'll actually knock the person out is something of a crapshoot as well. As a rule of thumb, anyone who's involuntarily unconscious for more than a few seconds has a concussion and needs immediate medical attention to ensure they don't have an epidural haematoma or some other time-bomb of a brain injury. In short: If you hit them in the head hard enough to knock them out, they stand a good chance of dying very quickly. A person who appears fine often subverts the trope by abruptly falling down dead.

Sometimes hand-waving by having the characters treat it as potentially serious and even lethal, but a statistically improbable number of characters turn out to be lucky and suffer no serious damage.

See How Many Fingers?.

Can sometimes be justified in cases of alien biology, superpowers, or artificial enhancement.

Not to be confused with Hollow-Sounding Head, Use Your Head, or Bald Head of Toughness. See also Can-Crushing Cranium, when the trope actually works.