Webcomic / The Back o' Beyond 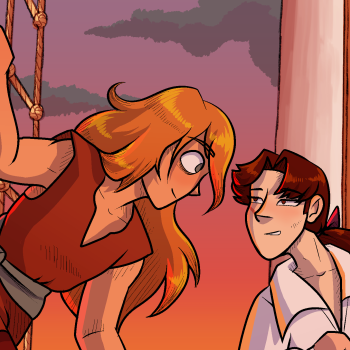 The Back o' Beyond is a fantasy/romance comic by Jon Walker, known online as JammyTheBirb. It began in June 2016, and centres around Nathaniel Jones and Sebastian Worthington, two unfortunate young men who find themselves press-ganged and taken hostage by a pirate crew, respectively.

The pirates are looking for a powerful spring which can grant eternal life to the holder of a certain amulet. Nate and Sebastian must keep this requirement a secret for the time being, to ensure Seb's safety.

The comic updates on Thursdays, and can be read on ComicFury here,

and on Tapas here.

In 2020, the comic was accepted into the Spiderforest webcomics collective.

The Back o' Beyond provides Examples of: