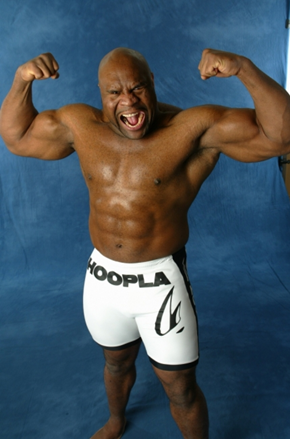 It's Bob Sapp Time!
"Imagine taking someone off the streets and throwing him into the ring with Mike Tyson and then watching that person win."
—Bob Sapp, about part of why Japanese crowds used to love him.
Advertisement:

Robert Malcolm Sapp (born September 22, 1973 in Colorado Springs, Colorado) is an American Professional Wrestler, Kickboxer and Mixed Martial Arts fighter. An immensely huge guy, Sapp started as a football player, but he achieved little there, so he went to train in professional wrestling at the World Championship Wrestling Power Plant before theclosure of the company. With seemingly nowhere else to go but to back NWA Wildside, he gained a few victories in the lower mid card as "The Beast" before being used to put over Omem. However, his fate would change radically upon being scouted by Japanese kickboxing promotion K-1 after a toughman contest. Through his charisma, physique and an insane amount of smart protection by K-1, Sapp became a wild star in Japan, competing both in kickboxing and MMA and winning incredible upsets over veterans of the sports like Ernesto Hoost and Kiyoshi Tamura, in no small part thanks to his overwhelming size. He got so popular that was featured in TV, films, commercials and all kind of merchandising, and of course pro wrestling, becoming the highest paid mixed martial arts fighter at his peak as well as the first and only black guy to win the IWGP Heavyweight Championship of New Japan Pro-Wrestling. He also competed in the fabulous Fighting Opera HUSTLE and became Heavyweight Champion in the Korean version of the World Wrestling Association. His boom lasted to 2005, a year in which fame caught with him and he slowly became less of a fighter and more as a deliberate tomato can, ending with a career twist which saw him taking dives for money for the next years, needed to pay some medical bills. With a late career filled up with loses and a pocket filled up with millions, he also dabbled in acting and sporadic pro wrestling.