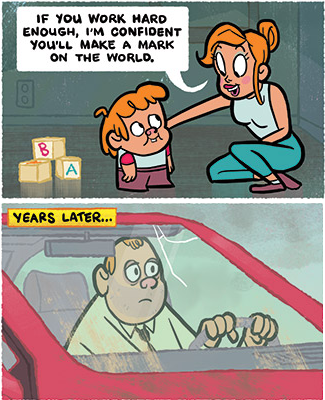 "If you believe that dedication and passion alone will give birth to equivalent results, then you're living in a naive dream."
— Lin Xue Ya, Thunderbolt Fantasy
Advertisement:

This is the argument that states that the outcome is directly proportional to the effort the individual put in. Failure is, therefore, the result of simply not having put in enough effort. This argument ignores all other relevant factors.

For example, sometimes who you know is more important than what you know. Or, your unrequited Love Interest isn't dating you because they're already dating and satisfied with someone else. Or, the so-called Self-Made Man did indeed have help from other people, even if it wasn't direct or reserved only for him (e.g., parental or public education, housing, healthcare, etc.). In addition, it is a fallacy because it is unfalsifiable; i.e., no matter how hard you worked, if you failed others could just claim however much you worked wasn't "hard enough", and never lay out an explicit definition of how much work is required to do whatever it is.

The Perfectionist (real or fictional) may incorporate this into their mindset — "That was good, but it wasn't right. Next time I will try harder and it will finally get there."

Often involves the words, "If I can do it, so can you!"

The idea behind the Charles Atlas Superpower. A staple of movies from The '80s. Contrast Hard Work Hardly Works when the extra effort doesn't achieve much and You Were Trying Too Hard where the extra effort prevents you from succeeding. Contrast also Instant Expert, and Born Lucky. Is sadly a Hard Truth Aesop where some times, hard work doesn't pay off.

Some tropes that rely on this: