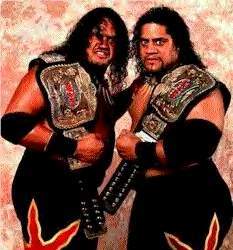 Samu (Samula Anoa'i) and Fatu (Solofa Fatu Jr.) were an American Professional Wrestling Tag Team as The Headshrinkers. They started in the Montreal territory in 1985 before moving to the World Wrestling Council in Puerto Rico. They went from there to World Class Championship Wrestling to WCW to WWE in 1992. They made their PPV debut at AWA SuperClash III in a victory over Michael Hayes and Steve Cox. Samu left in 1994 and was replaced by Sionne, better known as The Barbarian.

Among their in-ring achievements, they are former WWC Caribbean Tag Team Champions