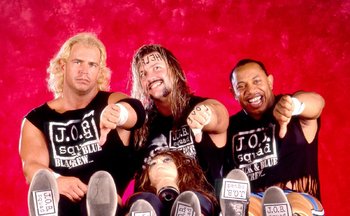 "Wake Up and Smell The Canvas, Baby!"
— Slogans from the official J.O.B. Squad T-shirts
Advertisement:

The J.O.B. Squad was a Professional Wrestling Power Stable in WWE from 1998-1999. They debuted (as Snow, Scorpio and Holly) on the August 23 (taped August 11) Sunday Night Heat. The idea was that they were frustrated after years of lame gimmicks and endless losing. They eventually added The Blue Meanie and Duane Gill, later repackaged as Gillberg, to the group. Gill won the group's only title, defeating Christian for the WWF World Light Heavyweight Title

. The group was broken up in early 1999 via Scorpio and Meanie getting fired and Holly achieving his career breakthrough by reinventing himself as Hardcore Holly.