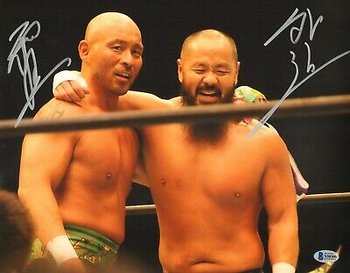 Whassup dawg!
Autographed by the boys themselves.
"Two of them were Jado and Gedo, who I'd met while they were making pennies working in Mexico. They'd follow Dragon's path and gone to Mexico after being told they were too small for New Japan. They were also tremendous performers and were major contributors to the strengthening WAR junior division."
— Chris Jericho, in his autobiography; A Lion's Tale: Around the World in Spandex.
Advertisement:

Akiyoshi and Takayama first competed for Frontier Martial-Arts Wrestling (FMW) under their real names, before debuting as a tag team going by Punish & Crush as part of NJPW's Rock 'n Wrestling parody, Takeshi Puroresu Gundan (TPG). While this run was short-lived, the two left NJPW as a prominent tag team, getting booked in numerous other promotions over the next decade. This would include branches of the Universal Wrestling Federation (UWF), Wrestling Association R (WAR), Wrestling International New Generations (W*ING, where they became Jado and Gedo), and an extended run with FMW as part of the Power Stable Team No Respect.

Returning to NJPW in 2001 as credible wrestlers, the two became mainstays in its junior heavyweight division early on, before eventually earning the position of head bookers following the exodus of Antonio Inoki from the promotion. Since then Jado and Gedo have been known for their association with several stables. From 2015 to 2017, the two also appeared in Pro Wrestling NOAH as part of a brief working relationship between NJPW and NOAH; Jado was the more involved of the two in that regard, as he became the head booker of NOAH during this time, leaving most of NJPW's booking to Gedo.

As part of the excommunication of the Guerrillas of Destiny from the Bullet Club, Jado, who sided with G.o.D., was also personally evicted by Gedo, ending their partnership after 33 years.

Per The Wiki Rule, more on their careers can be found here (together