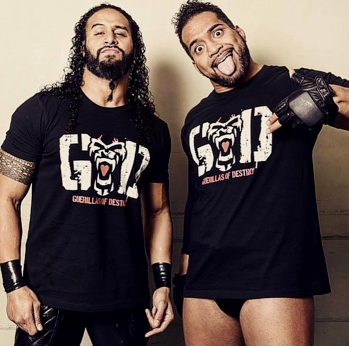 The Guerrillas of Destiny (or G.o.D) are a professional wrestling tag team consisting of adoptive brothers* and biological cousins Alipate Aloisio "Pate" Leone (born on October 15, 1982) and Tevita Tu'amoeloa Fetaiakimoeata "T" Fifita (born on May 7, 1983), currently performing for New Japan Pro-Wrestling (and occasionally Ring of Honor) under the ring names Tama Tonga and Tanga Loa. Alipate, along with his little brother Taula, were both adopted by their uncle and Tevita's father, the infamous Tonga Fifita, otherwise known as Meng or King Haku. While Haku tried to dissuade his boys from getting into wrestling, causing both Pate and T to go through secondary education, the two brothers gravitated to the business anyway, receiving training from their father in addition to none other than The Dudley Boys at the Team 3D Wrestling Academy before making their debut as a team under the name "Sons of Tonga", with Pate as Kava and Tevita as Nuku.

Eventually the two separated after gaining the interest of different companies. T was picked up by WWE and sent to its developmental system under the name Donny Marlow, before later emerging on WWE SmackDown as Mexican wrestler Hunico's bodyguard Camacho, in a rather uneventful stint before he left the company. Later, he would join TNA as part of Drew Galloway's revolution faction The Rising under the name Mica, before the stable disbanded and he was left with not much else to do before again being released. Pate, however, was picked up by New Japan and sent to the NJPW dojo as a young boy. As a NJPW wrestler, he took on the name Tama Tonga, eventually becoming the personal young boy of his good friend Karl Anderson, before joining Anderson and others in creating the infamous stable known as Bullet Club.

After several years as one of BC's undercard members, Tama saw an opportunity: around the same time his adopted brother, who's more than capable of getting work done, was cleared from TNA, Anderson and Doc Gallows were about to leave NJPW for WWE, leaving Bullet Club without a heavyweight tag team. Tama brought in his brother, who took on the name of Tanga Loa, recreating their tandem as the Guerrillas of Destiny, playing on the "god" theme of their ring names. Since teaming together, they have become 6-time IWGP Heavyweight Tag Team Champions, 1-time Ring of Honor World Tag Team Champions, 1-time WrestleCircus Big Top Tag Team Champions, 3-time NEVER Openweight 6-Man Tag Team Champions (twice with Bad Luck Fale, once with Taiji Ishimori), and increasing cornerstones of Bullet Club as a faction to the point that they were the catalysts of the mutiny and civil war that transitioned BC from the Golden Elite Era to the Cutthroat Era.