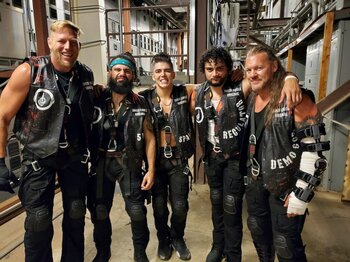 The Inner Circle was a Professional Wrestling Power Stable currently appearing on All Elite Wrestling, comprised of Chris Jericho (leader), Jake Hager, Santana & Ortiz, and Sammy Guevara. MJF and Wardlow joined the group in late 2020, only to leave again in March 2021 when MJF tried and failed to take over the group from Jericho.

Months after winning the AEW championship in the finale of the tournament against "Hangman" Adam Page, Chris Jericho gloated about his victory while asking for a 'Thank You'. He got his wish later on when Santana & Ortiz approached Jericho congratulating him fresh off of their own debut after the Young Bucks/Lucha Brothers match. This planted the seeds of the new faction when Santana/Ortiz teamed with Jericho against the Elite (Young Bucks & Kenny Omega) in the main event of the first AEW Dynamite episode. After that match took place, Guevara joined in the beat down alongside Jake Hager (who made his AEW debut) against the Elite. The following week, Jericho dubbed his faction the Inner Circle.

At AEW Full Gear 2020, MJF defeated Chris Jericho in a match, earning the right for himself and his bodyguard Wardlow to join the group. On the March 10, 2021 episode of Dynamite Jericho fired MJF again after a failed attempt to usurp him... only to find out that MJF had started his own stable. MJF's new stable proceeded to annihilate the Inner Circle, ending with Wardlow powerbombing Jericho off the stage through a table. After the Inner Circle returned a few weeks later, the stable underwent a Heel–Face Turn to feud with the Pinnacle. During the feud with the Pinnacle, they even obtained an honorary member of the faction in the form of 'Iron' Mike Tyson as of the April 14, 2021 edition of AEW Dynamite.

With their group feud against the Pinnacle over by the end of AEW Double or Nothing 2021 with the faction war spreading to individual feuds where both sides got wins and losses over each other, and Chris Jericho and MJF having a longer feud culminating in a match at AEW All Out 2021 where Jericho put his career on the line against MJF but won (while leaving reasonable doubt as the win wasn't clean).

On September 29, 2021, Sammy Guevara became the second member of the Inner Circle to win a championship, earning the AEW TNT Championship. In 2022, however, there came some major changes. Due to tensions between Jericho, Santana and Ortiz surrounding the latter two's friendship with Eddie Kingston, Guevara left the group again, this time for good; following this, Jericho along with Hager would turn on Santana and Ortiz to align themselves with 2.0 and Daniel Garcia, disbanding the Inner Circle and forming the Jericho Appreciation Society in its stead.

These are the Inner Circle tropes baby!: