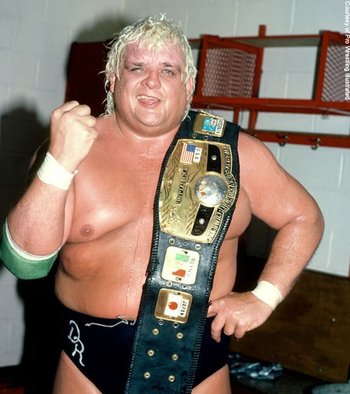 "I have wined and dined with kings and queens, and slept in alleys and dined on pork-n-beans."
Advertisement:

Trained by Joe Blanchard, Virgil Riley Runnels, Jr. (October 11, 1945 – June 11, 2015), better known as ("The American Dream") Dusty Rhodes was just a common man, workin' hard with his hands. He was also a American Football player turned professional wrestler who, throughout his forty year career, portrayed a happy-go-lucky schlub facing off against more elegant and physically fit competitors. Contrary to his underdog image, Dusty was a tank in his prime, known and feared throughout various permutations of the National Wrestling Alliance.

Working in various wrestling organizations since the late sixties, Dusty joined Jim Crockett Promotions in 1978. Throughout the late seventies and eighties, he would engage in a number of high profile feuds, facing off against the likes of Terry Funk, Harley Race, Abdullah the Butcher, and especially The Four Horsemen; particularly their leader, the elitist braggart Ric Flair. Dusty would win the NWA World Heavyweight Championship

a total of three times, and in 1985, he delivered what became known as the "Hard Times"

promo, considered Dusty's finest, and definitely in the running for greatest wrestling promo of all time.

In 1985, Dusty transitioned into booking what would eventually become World Championship Wrestling. As booker, Rhodes would develop a number of creative feuds and gimmick matches, including the WCW standard WarGames match. After openly defying a "no bloodshed" edict from TBS censors at Starrcade '88, Rhodes was fired from WCW. He would join the WWF in 1989, where he wrestled as "Common Man" Dusty Rhodes for two years, feuding with "Macho Man" Randy Savage. The most notable aspect of this period was the god-awful ugly yellow-polkadot unitard he would wear in the role. Some thought the costume choice was WWF owner Vince McMahon's way of humiliating one of his former competitors, but Dusty has always maintained the whole thing was his idea.

Rhodes would soon return to WCW as a booker (until he was supplanted by Eric Bischoff) and on-screen manager, and would join the commentating team for much of the 90s. Near the end of WCW's lifespan, Rhodes would briefly leave for a stint in ECW, before returning for one last feud with Flair.

After WCW's purchase and dissolution by the WWF in 2001, Rhodes would work for TNA, ROH, and various other indie wrestling leagues for the next five years, including Turnbuckle Championship Wrestling, a promotion founded by Rhodes himself. He was inducted into the NWA, Professional Wrestling and Lou Thesz Halls Of Fame. In late 2005, he would sign a WWE Legends deal, making occasional appearances on WWE programming from then on.

In his later years, Dusty worked on NXT as a promo coach, mentoring and inspiring a whole new generation of wrestlers. He called the developmental wrestlers his "kids" and many of them cite Dusty as a major influence in their character work and improved promo skills.

He is the father of fellow wrestlers, Dustin "Goldust" Rhodes and Cody "Stardust" Rhodes. He's raised some weird kids.

On June 10, 2015, paramedics responded to Rhodes' home in Orlando, Florida, after getting a call reporting that he had fallen. They drove him to a nearby hospital, where he died the next day. He was 69 years old. Following his death, NXT implemented the annualnote They missed 2017 because of a scheduling change, moving it from the end of the year to the beginning in 2018. Dusty Rhodes Tag Team Classic tournament in his memory.