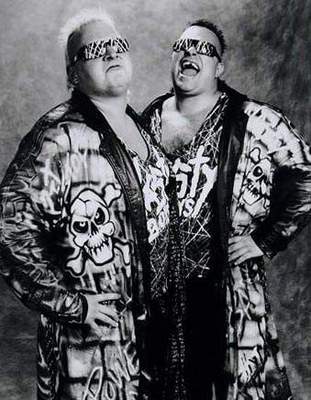 Knobbs (left) and Saggs (right), as Nasty as they wanna be.
The Nasty Boys are a famous Professional Wrestling tag team, made up of Jerry Sags and Brian Knobs, or simply Knobbs and Saggs. To put it simply, they were two big, burly street thugs with mullet-hawks who developed a reputation for their intense brawls and brash attitudes (as well as being particularly stiff workers). They debuted in the AWA in 1986, and have made appearances in most of the major promotions of the last couple decades, including WWE, WCW and even TNA. They are 1x WWE World Tag Team Champions