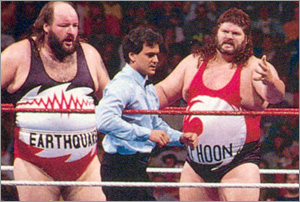 Earthquake (John Tenta) and Typhoon (Fred Ottman) were a Professional Wrestling Tag Team as The Natural Disasters. On the June 15, 1991 WWF Superstars, Earthquake was a in a six-man tag match with The Nasty Boys against Tugboat and The Bushwhackers when Tugboat turned on his partners. He was reintroduced as Typhoon the following week. They would feud with The Bushwhackers and The Legion of Doom into early 1992 when they turned face against their manager "The Mouth of the South" Jimmy Hart after he sided with Money Inc. ("The Million-Dollar Man" Ted DiBiase and Irwin R. Schyster) as the team to defeat the LOD for the WWE World Tag Team Titles

. The Disasters defeated Money Inc. for the belts on July 20, 1992 in a dark match at the taping for the August 8th WWF Superstars, and lost them back at the October 13th taping for the November 10th WWF Wrestling Challenge. They defeated George Takano and Shunji Takano for the SWS World Tag Team Titles

at SWS THE BATTLE OF KINGS NIGHT I on April 17, 1992, and lost them the next night to Haku and Yoshiaki Yatsu. They split up in early 1993 when they both left WWE.

"THESE TROPES HAVE EXPERIENCED A NATURAL DISASTER!":