Wrestling / The Powers of Pain 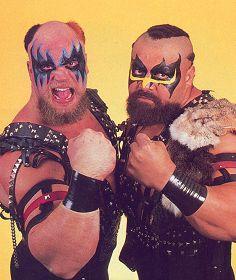 L-R: The Warlord, The Barbarian
Advertisement:

The Warlord (Terry Szopinski) and The Barbarian (Sione Vailahi) are a Professional Wrestling Tag Team as The Powers of Pain. They were formed by manager Paul Jones in NWA Central States in 1987 before moving to Jim Crockett Promotions. They also wrestled for WWE, WCW, several NWA promotions and numerous independents. They were 1x NWA World 6-Man Tag Team Champions