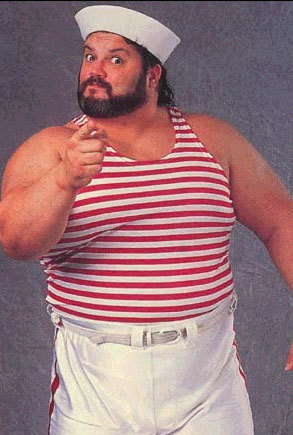 Fred Alex Ottman (born August 10, 1956) is an American retired Professional Wrestler best known for his time in WWE as Tugboat/Typhoon and in WCW as The Shockmaster.

Ottman had his start in 1985 in Championship Wrestling from Georgia as Sigfried the Giant, then Texas All-Star Wrestling and the Continental Wrestling Association as Big Bubba, Oregon Wrestling Federation as Hercules Haggerty, and Florida Championship Wrestling as U.S. Steel. In 1989, Ottman would join the WWE wrestling dark matches as Big Steel Men, but later on in the year would take on the persona of Tugboat (originally Tugboat Tyler, then Tugboat Thomas before settling on the shorter namesake), a wrestling sailor who was trained by Hulk Hogan and was also friends with him. Tugboat would make his TV debut the following year where he aided Hogan as well as having feuds with The Undertaker and an Intercontinental Title Bout with Mr. Perfect, of which he would end up on the losing side. In the summer of 1991, Tugboat made a heel turn in a tag team match, turning on The Bushwhackers to aid Earthquake and The Nasty Boys in the win. He would team up with Earthquake and adopt the new pseudonym, Typhoon, as they formed the tag team, The Natural Disasters, managed by Jimmy Hart. In early 1992, The Natural Disasters turned face after Jimmy Hart turned on them in favor of Money Inc. The Natural Disasters would feud with Money Inc. throughout 1992, even winning Tag Team Championships from them before dropping the title to them a few months later. In 1993, after Earthquake took a leave of absence from the WWE, Typhoon went to singles competition, mostly serving as jobber to the stars before leaving later in the year.

The same year Ottman joined WCW for perhaps his most well-known (or more accurately, infamous) gimmick: The Shockmaster. At Clash of the Champions XXIV, Sting and Davey Boy Smith were there at Ric Flair's talk show, "A Flair for the Gold", where the men were feuding (alongside Dustin Rhodes) with Sid Vicious, Vader and Harlem Heat (Kane and Kole at eight-man War Games match at Fall Brawl. Sid and Harlem Heat showed up demanding to know who the faces' fourth man would be. Sting introduced him and out came the Shockmaster with Ottman in a glittery purple stormtrooper helmet, black vest and jeans. He tore through the wall, with full intention of intimidating the heels. Unfortunately for him, as he attempted his grand entrance, he tripped on a piece of lumber and fell on the floor with his helmet sliding off, revealing him to be the former Tugboat/Typhoon. He quickly put his helmet back on and tried to continue as nothing happened, even though everyone else was cracking up with Ole Anderson voicing him and issuing the heels a threat. After this fiasco, WCW tried to salvage him by revamping him to be a klutzy construction worker. After the War Games match (of which Ottman would score the victory for his team), the character was abandoned and a few months later, Ottman returned as The Super Shockmaster, this time being a masked wrestler. In 1994, Ottman returned to the WWE once again as Typhoon, only lasting a few months as jobber-to-the-stars yet again. After wrestling in the indie scene and WFOW and WXO, as well as a return as Tugboat in the 20-man gimmick Battle Royale match at WrestleMania X-Seven, Ottman would retire from wrestling.

"All I have to say is, our partner is going to shock the world, because he is none other than the Tropemaster!!":