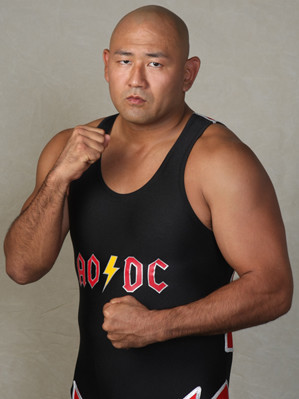 The Diet Butcher.
"I give to the fans fights I hope they will never forget. That's the most important thing."
Advertisement:

Alexander Otsuka (born Takashi Otsuka in 1971) is a Japanese Professional Wrestler and Mixed Martial Arts fighter. An amateur wrestling fan, he debuted in Yoshiaki Fujiwara's Pro Wrestling Fujiwara Gumi, but had his true start shortly after in the promotion Battlarts, created after the folding of Gumi. Though firstly a jobber, Otsuka eventually became one of the big stars of the company and was famous for his violent feuds with Yuki Ishikawa and Daisuke Ikeda. Along his work in lucharesu realm Michinoku Pro Wrestling, Otsuka moved to Pro Wrestling ZERO1 when Battlarts fell, but around the time he got better known for his MMA career in PRIDE Fighting Championship. He would turn into a cult hero for his guts and toughness, facing the best opponents of the time and coming unfinished from fights which a common wrestler would be lucky to make it out of alive. Upon returning to pro wrestling, Otsuka showed his funnier side by adopting the comedy gimmick of Otoko Sakari, a bisexual wrestler in a thong just as weird as it sounds. Under both that and his usual persona, he freelanced between all kinds of wrestling promotions over the years, especially Satoru Sayama's Real Japan Pro Wrestling and Tatsumi Fujinami's Dradition. He doesn't seem to have the retirement on his horizon yet.