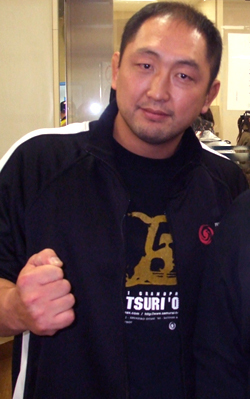 Shinjiro Otani (born July 21, 1972) is a Japanese Professional Wrestler, famous by his work at New Japan Pro-Wrestling and Pro Wrestling ZERO1. He started as a successful amateur wrestler in his highschool days before joining Animal Hamaguchi's dojo to become a pro wrestler. Otani was accepted in NJPW and turned into one of its hottest junior heavyweight prospects, and it didn't take much time before he did his perfunctory abroad excursion, hitting Canada. Upon his return, he defeated the famous Jushin Thunder Liger and stole the prestigious J-Crown from El Samurai in which would be the multi-title's last reign. After hitting the NJPW junior scene a bit more, Otani made a surprising move when he, accompanied by his long time friend Tatsuhito Takaiwa and others wrestlers, followed Shinya Hashimoto out of the company in order to form ZERO-ONE. Otani shone through the few years ZERO-ONE lasted, figuring as one of its most successful players both solo and in tag team (and at both junior and proper heavyweight divisions), and after Hashimoto's unfortunate death, he was made the true presence of the promotion's new incarnation, ZERO 1 MAX. As part of it, he also appeared in Pro Wrestling NOAH and was a key player in Fighting Opera HUSTLE. Even after replacing Yoshiyuki Nakamura as the president of the promotion, Otani remained as an active figure in the puroresu landscape until April 10, 2022, when he suffered a cervical spinal cord injury at a ZERO 1 event that left him a quadriplegic.