I Didn't Mean to Kill Him 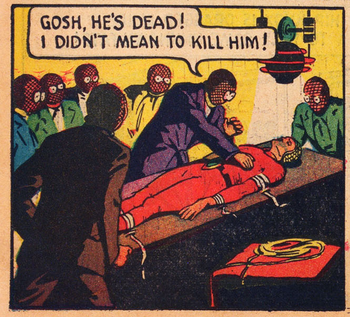 What can happen if you forget your safe word
"You leave her alone!" Woof screamed, and his tiny hands hit the small of Da's back, and Da fell. He tumbled down the stairs, over and over and over again … and he wasn't getting up, and why was his head turned like that? ... "I didn't mean it!" Woof cried, the tears streaming down his face … "I didn’t mean it! I didn’t mean it!" He was still yelling the words as he ran out the flat into the rain and mud of Fog Town. "I didn’t mean it!" But he had.
—The Victors Project
Advertisement:

An alternative to the Motive Rant has the perp, when cornered, explain how the murder was all an accident. Their excuse can be almost anything, but the most common explanations are

Compare to Accidental Murder, where the dead people are accidental collateral damage rather than dead by misaimed intention, and Murder by Mistake, where the killer was trying to kill someone else but got the wrong person. This trope can also overlap with I Just Shot Marvin in the Face if the fatal accident was the result of poor gun safety.

See also Monster Is a Mommy for when a seemingly threatening animal is accidentally killed.