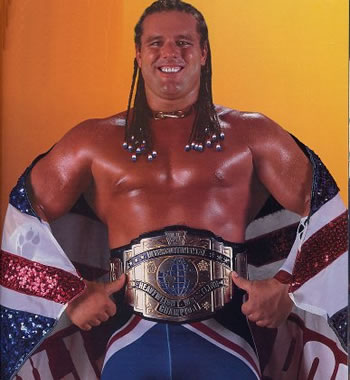 His upper lip was stiff even when he smiled!
"Oh, just look at that... THE RAW POWER OF THE BULLDOG!!!"
— Jesse "The Body" Ventura
Advertisement:

David "Davey Boy" Smithnote Claims that Smith's middle name was "Boy" as a result of one of his parents mistaking the name field on Smith's birth certificate for the gender field are incorrect, since British birth certificates are not completed by the parents; plus Smith's gender would have been written as "male" instead of "boy", anyway. One can look his entry in the England and Wales Births Register, which lists him as David Smith, without a middle name. (27 November 1962 – 18 May 2002) was a British professional wrestler. Smith became one of the biggest names in British wrestling and one of the most famous foreign stars in American pro wrestling from late 80's to late 90's under his wrestling name, The British Bulldog. Starting off in ITV's Saturday afternoon and evening show World of Sport, Smith's career would take him through Stampede, All Japan Pro Wrestling, WWE and WCW as a successful tag and singles wrestler, notching up numerous title runs along the way.

(1x with The Dynamite Kid and 1x with Owen Hart) and 2x WWF Hardcore Champion.

A long standing wrestler within WWE in the 90's along with several stints in WCW of varying success, Smith's demons would eventually take their toll as years of painkiller and steroid abuse were responsible for his death by heart failure on the 18 May 2002. Despite that, Smith is largely remembered fondly for his role in the ring and extensive career.

Oh, and for being BIZARRE!

However, that promo is NOTHING compared to this indescribable promo his cousin and future tag team partner the Dynamite Kid cut on him in their Stampede days.

"The Strongest tropes pound for pound":

"These tropes are gonna win this time the Royal Rumble, TONIGHT... because THEY ARE BIZARRE!!!"