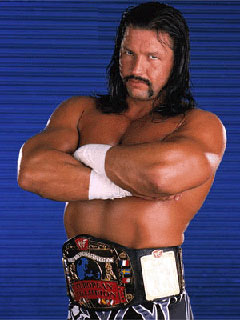 Allen Ray Sarven (born July 18, 1963) is a semi-retired American Professional Wrestler, promoter and trainer from Lima, Ohio as Al Snow. He debuted in 1982 in the Ohio independent scene and would spend the next decade working in a variety of territories, independents and in Japan either under the Snow name or as the masked Ninja Shinobi. He first caught on in SMW in 1994-1995 as a Heel. He also competed for ECW. As Steve Moore in 1993, he started a long tradition of being a TV Jobber for WWE. In 1995, WWE turned him into Avatar, where the gimmick was that he would walk to the ring holding a mask, put the mask on to wrestle, and took the mask off after the match. In 1996, he was repackaged as Leif Cassidy of the Tag Team the New Rockers with Marty Jannetty, and more jobbing. In 1997, WWE sent him down to ECW, which was where he started the "Head" gimmick. It was during this run that he received his one-and-only shot at a World Title on PPV, losing to ECW World Heavyweight Champion

Shane Douglas at ECW WrestlePalooza 98. He returned to WWE later that year and was thrown into a feud with Jerry "The King" Lawler with the angle being that Al was trying to get a meeting with Vince McMahon. This led to a match at the King of the Ring PPV where Al and Head faced Too Much (Brian Christopher and Scott Taylor), which Too Much won when Christopher (Lawler's son) attached a bottle of Head and Shoulders Shampoo to Head so he could pin it. Al later formed The J.O.B. Squad and, after The Blue Meanie and 2 Cold Scorpio were fired, Al went on to compete in the Hardcore Division, becoming a 6x WWE Hardcore Champion

. He also worked as one of the main trainers for WWE Tough Enough and for WWE's developmental program OVW. He currently works in a similar role in TNA. He has also competed for CHIKARA, Juggalo Championship Wrestling, TNA and many independent promotions.

He is in no way connected to Avatar.