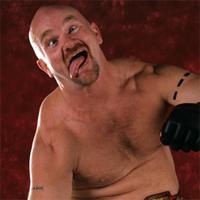 Duane Gill (born July 10, 1959) is an American Professional Wrestler from Baltimore, MD best known for his work in WWE as Gillberg, a rip on WCW's Goldberg. He debuted in 1990 teaming with Barry Hardy as the masked Tag Team The Lords of Darkness (Pain [Gill] and Agony [Hardy]) in the independent scene. He arrived in WWE in 1991 and spent years as a Jobber. At Survivor Series 1998, he returned as Mankind's surprise opponent in the first round of the WWE World Heavyweight Title

Tournament. He was squashed, of course, but he unexpectedly caught on with the fans. He defeated Christian on the November 17, 1998 WWE Raw for the WWF World Light Heavyweight Title

. He debuted in the Gillberg gimmick on the January 11, 1999 RAW. He lost the title to Essa Rios on the February 15, 2000 Sunday Night Heat. He returned again 2003 as part of The Rock's feud with Goldberg. He came back again for the 15th Anniversary Battle Royal on the December 15, 2007 Raw, and was the first one eliminated. He has also wrestled for years in the independent scene, particularly for Maryland Championship Wrestling

Among his other in-ring achievements, The Lords of Darkness were the inaugural MEWF Tag Team Champions

, he is a former NWA Jersey Light Heavyweight Champion

, and he and Hardy were 2x ECPW (New Jersey) Tag Team Champions