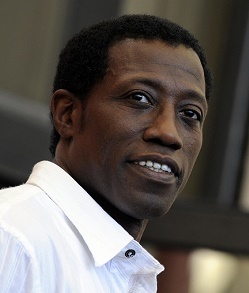 "There are so few guys who do action and do it well. Even fewer who are African-American. Even fewer who have classical-theater training. So a cat like me coming in, I'm bringing all of that to an action movie."
Advertisement:

He's famous for appearing in films like New Jack City, White Men Can't Jump, Passenger 57 and Demolition Man, and for portraying the Marvel Comics dhampyr Blade in a film trilogy.

He formed a production company, Amen-Ra Films, in 1991, and a subsidiary, Black Dot Media, to develop projects for film and television. He is a lifelong martial artist, having training in Karate, Capoeira, hapkido, Taekwondo, Shaolin kung fu, Kickboxing and Brazilian Jiu-Jitsu.