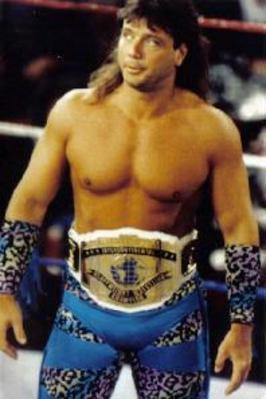 Born Frederick Marty Jannetty on February 3, 1960, Marty Jannetty is an American professional wrestler whose name is, unfortunately, best known as a byword for a wrestler who's left behind by a Breakup Breakout (and even the former Trope Namer for Breakup Breakout itself). He debuted in 1984 and worked for various National Wrestling Alliance territories and for the American Wrestling Association. His most famous work was him teaming with Shawn Michaels as The Midnight Rockers, later renamed The Rockers in WWE. That ended when Shawn infamously threw Marty through the window of the set of Brutus "The Barber" Beefcake's "The Barber Shop" on the January 12, 1992 (taped December 3, 1991) WWF Wrestling Challenge. He would drift in and out of WWE every few years, starting in 1993. He also appeared for WCW, ECW and numerous independent promotions.

Along with his IC Title reign, he and The 1-2-3 Kid held the WWE World Tag Team Titles

, he is a former NWA Central States Heavyweight Champion

and they were 3x AWA World Tag Team Champions