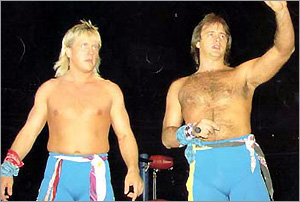 Ricky Morton and Robert Gibson are a Professional Wrestling Tag Team as The Rock 'n' Roll Express. They started in Memphis in 1983 as a B Show replacement team for The Fabulous Ones. As luck would have it, the RNRs (name taken from their first initials) would far surpass the Fabs. They would go on to hold the NWA World Tag Team Titles 8 times (4x NWA Mid-Atlantic version

and 4x revived version that started in 1993

) and were THE underdog pretty-boy babyface team of their era. Over time, they would split up and go in other directions before inevitably coming back together. They have competed for NWA, WCW, WWE, SMW, FMW, TNA, All Japan Pro Wrestling, the AWA and many other promotions. They were inducted into the WWE Hall of Fame in 2017. In January 2022, Ricky announced that the Express would start their farewell tour later that month, saying that he wanted to focus more on backstage work and on the wrestling career of his son Kerry.

The Rock 'n' Roll Express are the Trope Namers for: