Wrestling / The Fabulous Ones 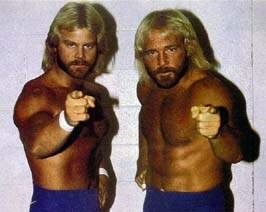 Steve Keirn and Stan Lane were a Professional Wrestling Tag Team as The Fabulous Ones from 1982 to 1987. The team was put together, in the storyline, by Memphis legend 'The Fabulous One' Jackie Fargo, in response to manager "The Mouth of the South" Jimmy Hart's attempt at pushing his team of Troy Graham and Porkchop Cash under that name. The team was Memphis' initial response to the rise of MTV, and were introduced through a series of music video-style vignettes, a technique which continues to this day. Along with Memphis, they also competed in the AWA, Florida and World Class in Dallas. When NWA promoter Jim Crockett closed down the Florida territory, manager Jim Cornette took Lane as Bobby Eaton's replacement tag team partner in The Midnight Express after "Loverboy" Dennis Condrey quit without really giving notice. They were 1x USWA World Tag Team Champions

. They have gone on to do some teaming in the Florida indies in the 21st Century. Today, Lane is retired and still does the occasional reunion match with other members of the Midnight Express. Keirn continued in the Florida independents throughout the 1990s and early 2000s and also ran a wrestling school, producing, among others, Mike Awesome and Dennis "Phineas I. Godwinn"/"Mideon" Knight, and also ran WWE's developmental promotion Florida Championship Wrestling for a time.